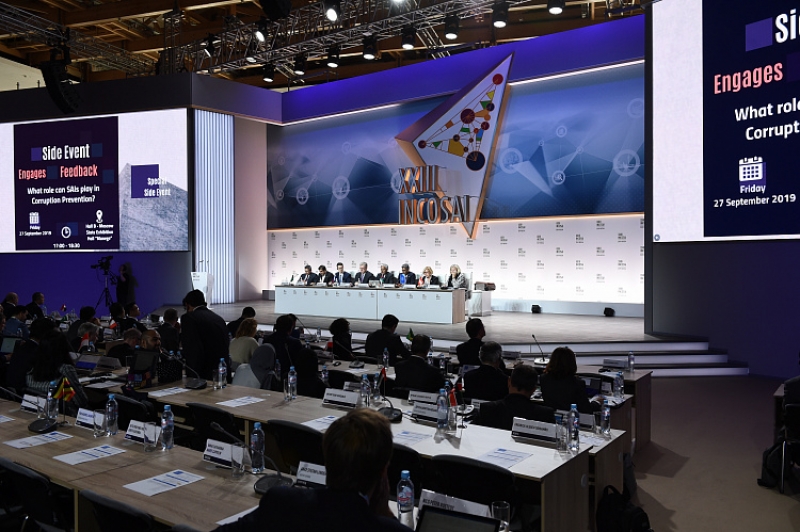 The XXIII INCOSAI*, the largest international audit forum, launched in Moscow. The event focuses on two topics: “Information Technology for the Development of Public Administration” and “The Role of Supreme Audit Institutions in Achieving National Priorities and Goals”. Delegations from 169 countries came to discuss this issue.

The key event of the first day was the meeting of the INTOSAI Governing Board. Aleksei Kudrin, Chairman of the Accounts Chamber, opened the meeting with his welcome speech: “Today’s meeting precedes the start of the XXIII INCOSAI. Thus, we ensure continuity and further development of the ideas laid down during the previous Congress. The most important tool in our work is sharing experience, and we consider the upcoming week in Moscow to be a great opportunity for this.”

The main item of the Governing Board’s agenda was summing up the INTOSAI’s progress over the past three years. According to Aleksei Kudrin, “Over the past time, we all have noticed the changing dynamics in the public administration development. Society is increasingly demanding in terms of the quality of public services. And now we are facing the need to clarify the role and functions of audit institutions in public administration. Today we should focus not on only on effective finance administration, but also on the quality of life, implementation of approaches to address global and cross-border issues.”

Angel Gurría, Secretary-General of the Organization for Economic Cooperation and Development (OECD), addressed the Governing Board members in his video message. He noted the important role auditors play in the modern world and encouraged them to continuously improve their skills: “I am absolutely convinced of the strength of auditors. You remain independent players out of politics, and it is this attitude that makes you an invaluable element. In addition, you are an important voice that supports public trust in government agencies. It is thanks to you that people can trust their government, count on the quality of the services provided and politicians’ accountability. However, the world today is changing incredibly fast and, certainly, we all expect auditors to work more efficiently too, constantly accelerate, and develop technology; otherwise, we will fall behind the pace of change. That is why, events such as this Congress are so important to us. Here, we can share our experience and best practices.”

The importance of new technology in auditing, expanding cooperation, and developing professional standards was discussed at the meetings of the major INTOSAI committees: PCS, CBC, and KSC. In particular, the Knowledge Sharing Committee (KSC) addressed the issue of establishing a new Working Group on Impact of Science and Technology on Audit to focus on key developments in blockchain technology, cyber security, data analysis, etc. The group will be chaired by SAI UAE.

The Committees have also summed up their progress over the past three years and set the major strategic goals for the new period. The meeting of the KSC heard the reports of two INTOSAI working groups chaired by the Accounts Chamber of Russia. These are the Working Group on Public Procurement Audit (WGPPA) and the Working Group on the Sustainable Development Goals and Key Indicators (former name: Working Group on Key National Indicators). In addition, the Committee meeting reviewed the updated INTOSAI Community Portal, designed to support regular communication and data exchange.

On the first day of the Congress, Aleksei Kudrin, Chairman of the Accounts Chambers, held bilateral meetings with delegations of SAI UK and SAI Mongolia. The parties discussed the Forum's agenda, shared their experience in public audit, and outlined strategies for further development of their bilateral cooperation. Colleagues from the UK and Mongolia invited representatives of the Accounts Chamber to pay an official visit to their countries.

Tomorrow, on September 24, the Governing Board will continue its work with open discussions on the INTOSAI’s development.

INTOSAI’s supreme body is the Congress, convened every three years in different countries. The decision to hold the next Congress in Russia was unanimously made by the XXII INCOSAI participants in 2016 in Abu Dhabi.