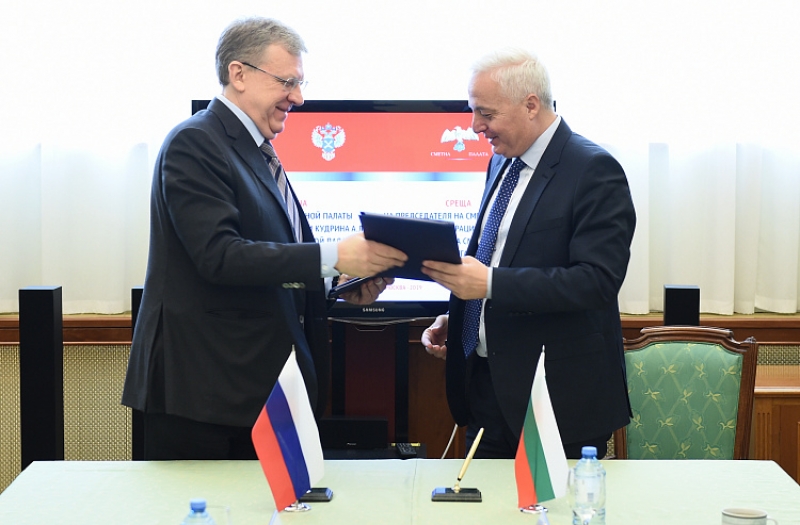 The Supreme Audit Institutions (SAIs) of Russia and Bulgaria signed an updated version of the Cooperation Agreement.

The meeting participants noted that the new realities and the objectives that the Supreme Audit Institutions are facing currently are the grounds for the need in updating the agreement. “In recent years, the role of the Supreme Audit Institutions has increased greatly and has long gone beyond the traditional financial control. We see these changes in a strategic and integrated approach to government auditing, performance audit, and consulting activities. Therefore, our goal now is to be not only controllers but also external partners of ministries and departments, that is, not only identify the problems but also discuss the ways to solve them,” said Alexey Kudrin.

During the meeting, the parties exchanged experience in applying new methods and approaches to conducting a government auditing.

Alexey Kudrin told his colleague about the main changes that are occurring in the activities of the SAI of Russia. Thereby, he particularly noted the importance of introducing digitalization into the work of the department: “Digitalization is our main goal. I set the task to digitize 30% of our audit work within six years – so that the auditors could pay more attention to analytics.”

Tsvetan Tsvetkov agreed with Alexey Kudrin, noting that the SAI of Bulgaria also pays great attention to the digitalization of its activities. “We use special software that allows us to improve significantly the inspections quality. We have 100% digitalization in the area of financial and performance audit. Now we are working on the digitalization of compliance audit and another specific form of audit – the audit of the political party activities,” he said.

The parties are planning to discuss the use of new technologies and audit forms in more detail at the XXIII INTOSAI Congress, which is to be held in 2019 in Moscow. “We hope for a serious discussion and new solutions that will help to improve the government auditing system in all countries,” said Alexey Kudrin.

Following the meeting, the parties agreed to continue the exchange of experience and information on all topical issues of the development of external government control. “We are committed to the development of our cooperation. I am sure that the Agreement signed today, which has been prepared with due consideration of all contemporary realities, will become a solid basis for this development,” emphasized Alexey Kudrin.

In particular, the updated agreement involves the exchange of information, including standards and methodological developments, holding of joint and parallel events, an organization of conferences, seminars, and roundtables on the main issues of an external government audit.

The parties decided to start implementing the Agreement immediately after signing it – they held a round-table conference on sharing the experience in assessment of the SAI contribution to the system of governance, methodology of the government program audit, and assessment of internal audit services.