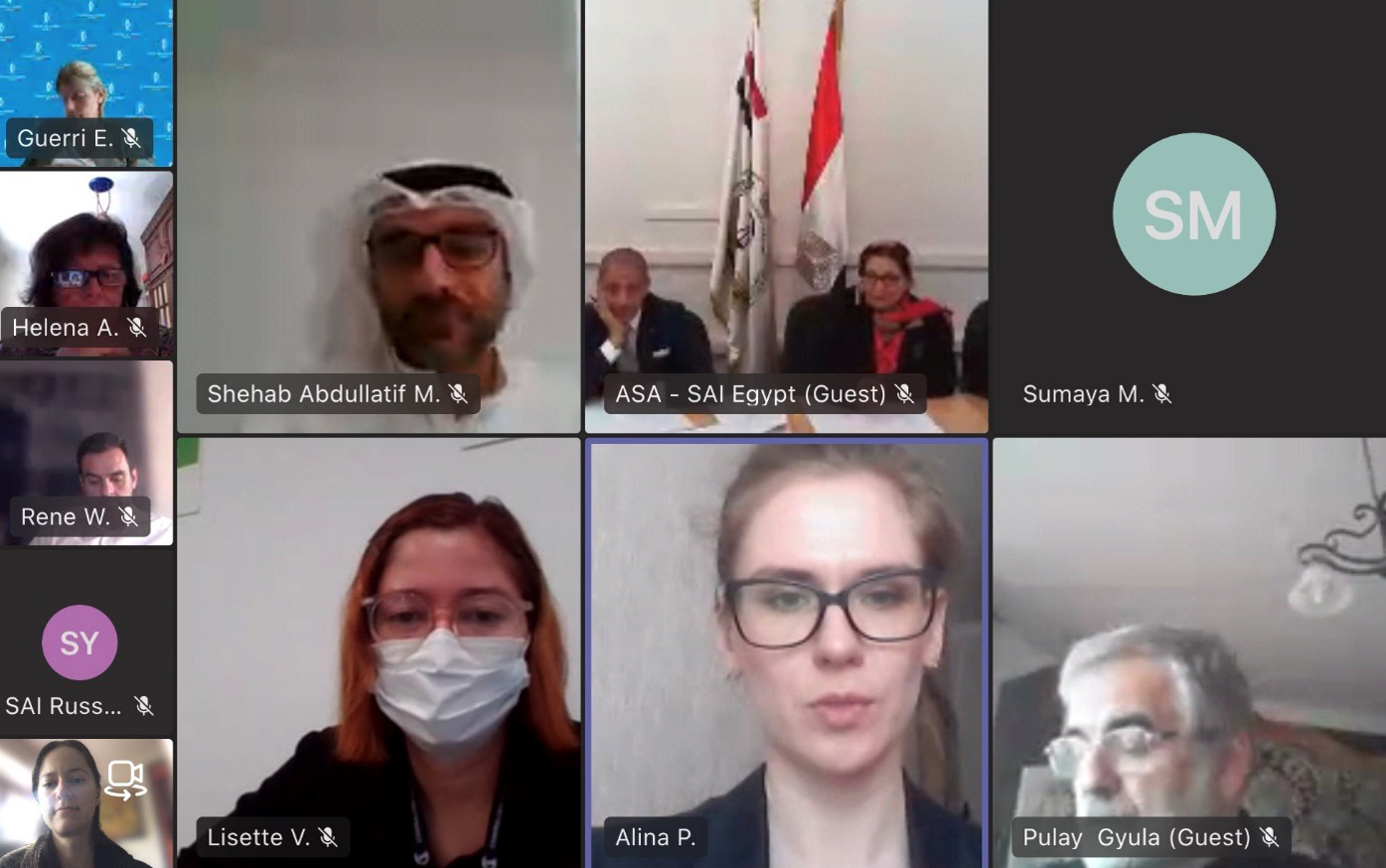 On 31 May 2021 SAI of the United Arab Emirates (SAI UAE) hosted a virtual organizational meeting of the INTOSAI Global Expert Team (IGET) to discuss its cooperation activities.

Team was formed in 2020 and acts on behalf of the INTOSAI to help execute the implementation of the Memorandum of Understanding signed in 2019 between INTOSAI and the United Nations Office on Drugs and Crime (UNODC) for promoting the collaboration between both parties.

IGET is composed of eight members that fairly represent both geographical distribution of INTOSAI regions and SAIs’ recent remarkable works and programs that aim at promoting ethics and. integrity and fighting corruption. The team is led by SAI UAE with SAI Ecuador being the vice-team leader. The team’s membership includes the SAIs of Austria, Egypt, Hungary, Italy, Portugal, Russia and the UNODC representatives. Early this year the team members endorsed its Terms of Reference.

During the meeting the participants discussed the draft Action Plan of the IGET on promoting collaboration between Supreme Audit Institutions and Anti-Corruption Authorities in the prevention of and fight against corruption. This action plan covers the period from the founding date of IGET to a foreseeable future.

SAI Hungary commented on the item dedicated to the 8th Integrity Seminar which took place earlier this year and suggested to mention the SAIs, who delivered welcoming words and shared best practices during the opening conference of the Seminar.

SAI Austria mentioned that SAI Brazil to be stated under the item dedicated to the organization of the 75th Meeting of the Governing Board of INTOSAI.

SAI Ecuador suggested to list INTOSAI regional organizations from INTOSAI, represented by members of the Global Expert Team. In the case of the OLACEFS, the Specialized Working Group on the Fight Against Transnational Corruption – GTCT (chaired by SAI of Ecuador) works along UNODC in several projects. For instance, UNODC contributed with a regional analysis for the Good Practices Handbook to Fight Corruption.  GTCT leads a coordinated audit on the socio-economic aid programs implemented during COVID-19, with a focus on transparency. EUROSAI Task Force on Audits and Ethics also has carried related work so might be mentioned in the Plan. SAI Portugal suggested this information to be stated in the footnote.

SAI Egypt, which chairs the INTOSAI Working Group on the Fight Against Corruption and Money Laundering (WGFACML) thanked the team members for their work and commented that the plan should not overlap the activities of the working group. SAI UAE reaffirmed that there wouldn’t be any duplication.

SAI Russia as the presented the University of INTOSAI (U-INTOSAI) initiative created under the auspices of the INTOSAI Chair. U-INTOSAI is an open online educational platform for the INTOSAI community and broader audience interested in state audit and its value for governments, academic community and citizens. The mission of the project is to contribute to open exchange of knowledge and experience within and beyond the INTOSAI in order to nurture auditors of the future and promote the value of supreme audit institutions for governments, academic community and citizens using digital technologies and capacity building tools.

The U-INTOSAI platform allows to upload courses, as well as to create a special landing page with active link to the course located at another platform.  One of the sections of the Platform will be dedicated to the anti-corruption activities led by the IGET.  The courses will be free of charge and accessible for all the registered users.

SAI UAE concluded the meeting with an announcement of the forthcoming side-event organized at the margins of the special session of the United Nations General Assembly. The event will take place on 2 June 2021 via MS Teams and will be dedicated to the role of Supreme Audit Institutions in the prevention of corruption in modern times.