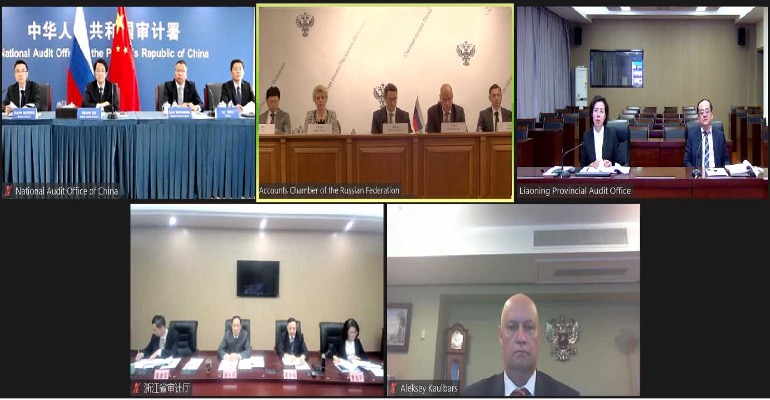 Mr. Timur Makhmutov, Director of the Department for International and Regional Cooperation moderated the meeting.  He noted the rich history of relations between SAI Russia and SAI China – nearly 15 bilateral experience-sharing seminars have been held over the past 20 years of cooperation. He also emphasised the particular relevance of the seminar topics for both countries.

The Deputy Auditor General of the National Audit Office of the People's Republic of China (CNAO), Mr. Zhang Ke, also delivered a welcoming speech. He pointed out the close cooperation between the ACRF and the CNAO, as well as significant results achieved in practical spheres.

SAI China pays special attention to green energy. A series of measures are being implemented to achieve carbon dioxide peaking and carbon neutrality in the country, and it is the task of the supreme audit institution to assess their implementation. For example, the speaker talked about the audit of funds relating to energy saving and emission reduction conducted in 2021. The audit involved funds allocated to support renewable energy (RE) power generation projects, promotion and use of RE vehicles. In total, SAI China audited the appropriate use of more than RMB 160 billion (USD 22.6 billion). Notably, the CNAO put a particular emphasis on the use of research and data in the audit.

For his part, Mr. Igor Lee, Head of Inspection of the Procurement and Energy Department, emphasised in his report that the green economy refers to a comprehensive modernisation to decarbonise all sectors of the country, including through the energy transition. SAI Russia's audit of global energy transition challenges is hampered by unstable global economy situation and diverse economic structures of the Russian Federation's constituent entities.

«It requires different approaches. A large set of rapidly changing factors and the extent of their influence need to be taken into account when providing comprehensive assessments of the energy transition effects»,

Mr. Aleksei Loshkin, Chairman of the Accounts Chamber of Chelyabinsk Region, shared his experience in assessing the region's commitment to carbon control. For example, the region is introducing a hydrogen production pilot project. To this end, the region's authorities are cooperating with metallurgical companies to modernise their production facilities. In addition, the region is piloting an emissions quota system. Carbon farms are also being created to test the technologies for extracting major greenhouse gases.

Audit of scientific development and innovations was in the focus of the second session. Mr. Dmitry Zaitsev, the auditor of the Accounts Chamber of the Russian Federation, listed the main activities of the Accounts Chamber in the innovation public policy in his presentation. They include analysis of laws and regulations, audit of the public policy funding, analysis of government support areas and development of methodological documents on innovation audits. The auditor also mentioned the main challenges related to innovation audit. For example, the relevance and availability of innovations development data. Another challenge is the limited applicability of some of the audit methods due to the greater risks associated with innovations.

«When conducting performance audit of innovation activities, the uncertainty of the market and projects’ technological prospects must be taken into account. It should also be recognised that each form of support and each development institution requires a different audit approach. These approaches will vary depending on the specific innovative development institutions, the funding mechanisms used and their purpose»,

Mr. Yu Miao, Deputy Director General of Liaoning Provincial Audit Office, shared the agency's experience in innovation audit.  The province is the cradle of Chinese industry. More than a thousand innovative industrial solutions were developed in the province. There are 114 universities and 14 national key laboratories in the province. 58 members of the Chinese Academy of Sciences and the Chinese Academy of Engineering are originally from Liaoning, which ranks the eighth among all the PRC provinces.

In 2019, the regional audit institution audited the science and technology innovation policy implementation, and in 2021, the use and management of funds allocated to science and technology innovation. The audit has not only identified weaknesses in financial management, but has also contributed to the methodology development for auditing innovative enterprises at various development stages, as well as upgrading Northeast Technology Resources Market (NETRM) to be an integrated service platform.

The aim of the NETRM is to facilitate the commercialization and transfer of original technologies.. The platform is designed to provide intermediary services, respond to business needs and deliver financial services. The platform is state-supported. The commercialization of sci-tech research results through NETRM is worth more than 200 million yuan ($28.3 million) annually.

The third section discussed the spatial organisation of countries and the vitalisation of agricultural areas. In 2017, Chinese President Xi Jinping outlined a strategy for rural vitalisation and integrated rural-urban development. The CNAO and local audit institutions all audited the relevant policy implementation. Mr. Xie Yonggang, Deputy Director General of Zhejiang Provincial Audit Office spoke about the province's audit experience. Mr. Xie pointed out that the Zhejiang Provincial Audit Office is using big data analytics in auditing the vitalization of rural areas, and is building a platform for processing and analyzing data on the agricultural subsidies use. A data analysis platform based on geographical information is also developed to assess changes in the terrain.

Ms. Natalia Trunova, auditor of the Accounts Chamber of the Russian Federation, outlined in her report the main features of Russia's changing transport structure under sanctions, as well as trends in the development of the country's agglomerations. The speaker mentioned that due to sanctions, Russia has to rapidly redirect its exports towards the Asia-Pacific region. Under these circumstances, the key objective of spatial development is to build a transport framework capable of addressing the challenge of transporting economically essential goods. In addition, the development of large eastern agglomerations plays a major role in terms of Western sanctions. It was highlighted that Yekaterinburg, Novosibirsk, Tomsk and Chelyabinsk agglomerations demonstrate the greatest potential.

«an important aspect of Russia's spatial development is to promote the formation of large urban agglomerations, which should become centres of business and investment activity, development of innovative sectors of the economy, and scientific and technological progress".

At the end of the seminar, Mr. Zhang Ke, Deputy Auditor General of the CNAO and Mr. Timur Makhmutov, Director of the Department for International and Regional Cooperation, both noted the fruitful nature of the seminar and expressed hope for further exchange of experiences between the supreme audit institutions of the two countries. It was underlined that such events contribute to strengthening bilateral relations at the state level and promote cooperation.