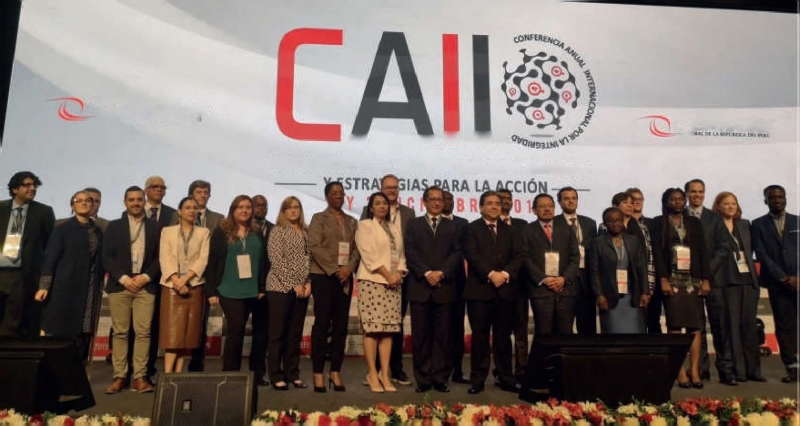 In December 2019, the Accounts Chamber of the Russian Federation took part in the International Annual Conference for Integrity “Detection of Corruption: Mechanisms and Strategies for Action” held in Peru.

Over 2,000 participants, including representatives from 50 Supreme Audit Institutions have been sharing their experiences and best anti-corruption practices for two days.
Opening the conference, Mr. Martin Vizcarra, the President of the Republic of Peru, said that the problem was quite urgent not only in Latin America but throughout the entire world. In his opinion, not enough work is being done to raise awareness among citizens, government agencies, and businesses. It is important to find new approaches to solving this problem: “We need a real and effective breakthrough in the fight against corruption, a move from words to action with specific and effective measures, and here the search for a compromise requires going beyond the discussion,” Martin Vizcarra said in his speech.

Mr. Aleksey Kudrin, Chair of the Accounts Chamber of the Russian Federation, also supported the need for changes in his video message to the participants. He noted that the use of modern anti-corruption approaches, in particular, a risk-based approach, legislation improvement, and information technology increase confidence in the government. In his opinion, the emphasis in the fight against corruption should shift towards prevention; close interaction with law enforcement agencies and civil society is required.
The following issues were brought to the agenda of the conference: cybersecurity, operations with big data and artificial intelligence, international anti-corruption practices, legislative changes, citizen involvement, and increased openness as well as psychological aspects of the impact on decision-making.
During the speeches, it was noted that corruption risks often arise due to a lack of information. The World-Check electronic platform, created by Refinitiv, a data analytics company, contains information that can help companies identify the risks of financial crime. Such mechanisms contribute to compliance with laws on countermeasures to combat legalization of crime proceeds and financing of terrorism.

So-called “politically exposed persons” (PEP) can pose a certain corruption hazard. The term refers to an individual who plays an outstanding public role and occupies or has occupied a public position. By virtue of their position and the influence that they can exert, these people pose an increased corruption risk. The tasks of the Financial Action Task Force on Money Laundering comprise the development of world standards on countermeasures to combat legalization of crime proceeds and financing of terrorism as well as the assessment of the national systems’ compliance with these standards.

During a panel discussion on the anti-corruption strategy in the UN Agenda 2030, the delegation of the Accounts Chamber of the Russian Federation presented to the conference participants its tools that can improve the transparency of government expenditures and control by the society: national goals monitor panel and the Government Expenditures project. With their help, citizens can get almost real-time information concerning what the state spends budgetary funds on and how national projects are being implemented. Thus, SAIs can contribute to SDGs success.