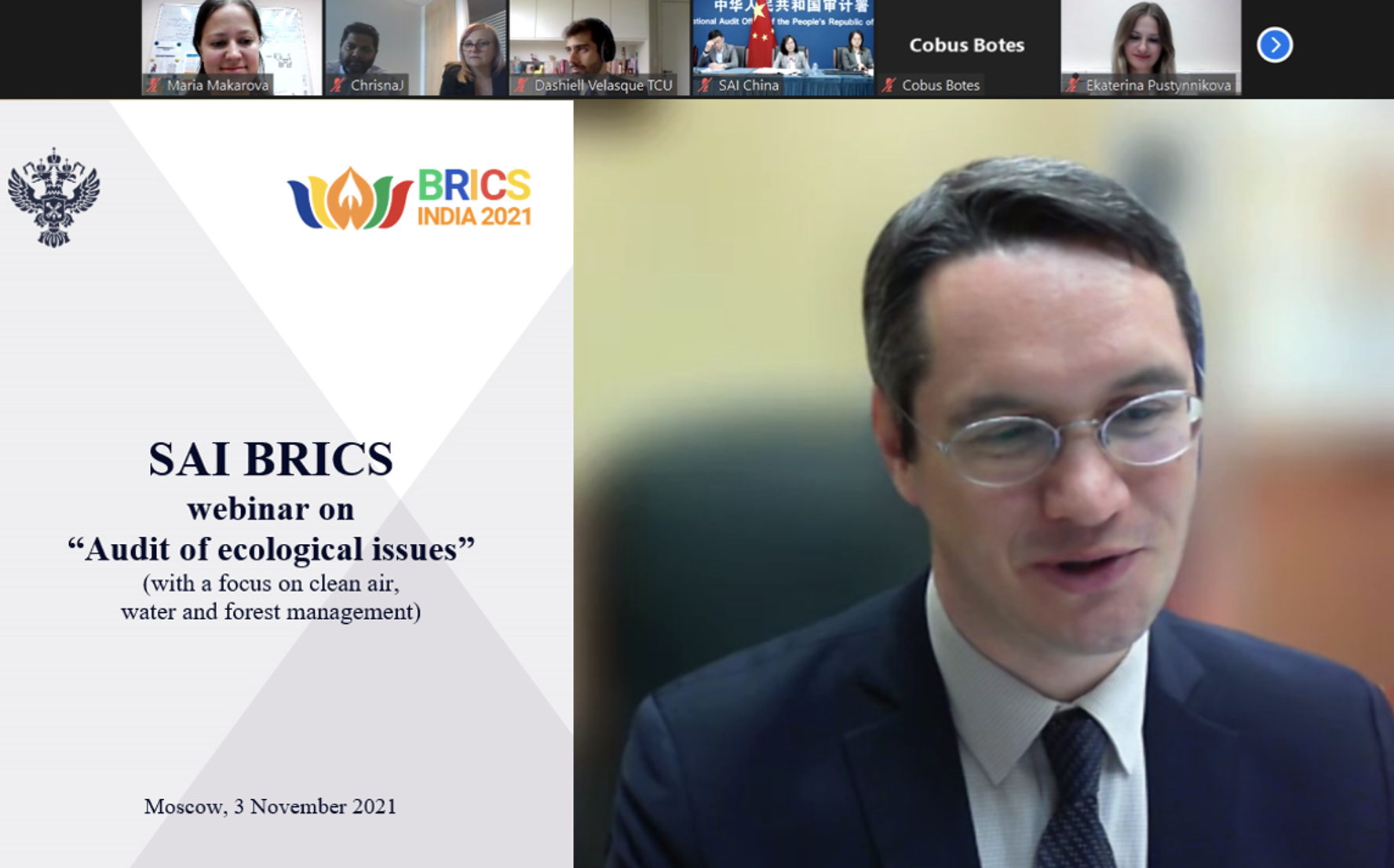 A webinar on environmental auditing (with a focus on clean air, water use and forestry) was held on 3 November 2021 on the initiative of the Accounts Chamber of the Russian Federation as part of the cooperation between the BRICS supreme audit institutions.

The event was held on the eve of the five-year anniversary of the Paris Agreement, one of the key international treaties on climate change. Presentations were made by representatives of SAIs from Brazil, Russia, India, China and South Africa. The meeting was also attended by experts from the control and auditing bodies of Russian regions.

The Brazilian SAI was represented by auditor Dashiell Velasque da Costa, who outlined Brazil's experience with environmental and forest management audits in his presentation ‘Coordinated Auditing of Protected Areas’.Mr da Costa pointed out that auditing was a key element in the biodiversity conservation strategy throughout his country’s regions. Its main purpose is to assess the standard of operation and management of protected areas and the contribution made by development in such areas to international goals. Among the main shortcomings identified during the audits, the Brazilian SAI cited failure to implement fully the National Plan to Prevent and Control Deforestation in the Brazilian Amazon, along with a lack of clear division of responsibilities and authority in development and coordination of public policies to combat illegal logging in the developed part of the Brazilian Amazon.

Russia’s SAI was represented by chief inspectors of the Department of Environmental Management and Agricultural Sector Audit. Maria Korznikova spoke about her experience in monitoring the National Ecology Project, including clean air issues. Ekaterina Pustynnikova highlighted the specific features of the forestry expenditure audit conducted by the Accounts Chamber of the Russian Federation, including current approaches to auditing implementation of strategic documents, such as the state programme ‘Development of Forestry’, the federal project ‘Conservation of Forests’, as well as the key results of thematic audits.

“We are improving the format of our audits, moving from classic financial auditing to performance auditing, strategic auditing and project auditing. An important role is assigned to informing the public about the project results on the Accounts Chamber website, as well as through the media”,

The Indian SAI was represented by Pushkar Kumar and Manish Kumar of the International Centre for Environment Audit and Sustainable Development (iCED). In their presentation, the Indian colleagues focused on auditing issues related to climate change, air pollution and the state of the forestry sector. They also highlighted the experience of India's SAI in using innovative auditing practices. The main challenges in conducting environmental audits, according to the Indian experts, include an insufficiency of knowledge of the subject area for establishing causal relations between environmental problems; the shortage of available data and reporting documentation, in particular on minerals extracted in the forest area and on damage caused to forests; inconsistency in planning and collaboration between departments responsible for environmental issues.

For her part, Shao Yunfan, Director of the Department for Resource and Environment Audit of China's SAI, touched upon energy conservation and reduction of carbon dioxide emissions in China. She noted that, in September 2020, Chinese President Xi Jinping announced the goal of China achieving carbon neutrality by 2060. In this context, Ms Shao focused her presentation on China's experience in auditing air pollution control and pollution prevention.

Kevish Lachman, Head of Performance Auditing at South Africa's SAI, and Chrisna Janse van Rensburg, Senior Manager responsible for performance auditing, spoke about their experience of auditing abandoned mines. South Africa is located in an arid area, meaning that crops depend on rivers being full and groundwater availability. In many mined-out mines, sulphuric acid mine water, formed by interaction between metal sulphides, water and oxygen, spills onto the surface. This is a serious environmental concern directly affecting public safety.

The participants agreed to continue their collaboration and active exchange of experience in the five-party format.