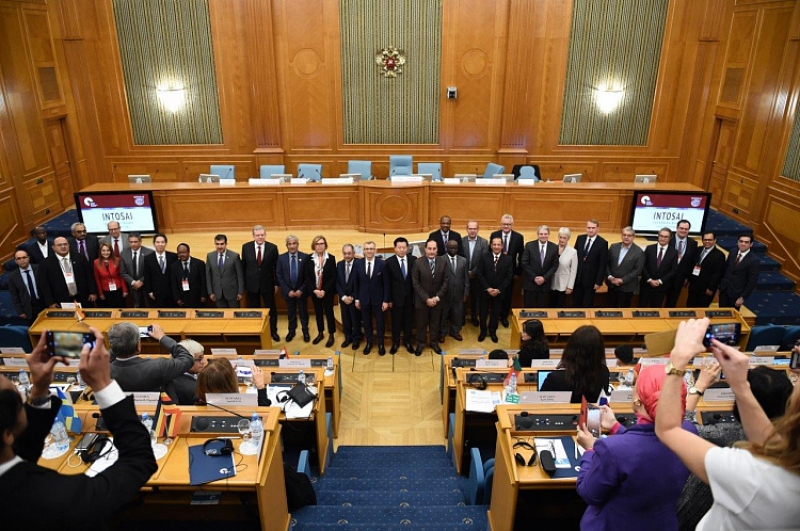 On 15 and 16 November, the 71st session of the Governing Board of the International Organisation of Supreme Audit Institutions (INTOSAI)* was held in the Accounts Chamber. About 100 delegates from 30 countries, including the United Arab Emirates, Saudi Arabia, Austria, the USA, Brazil, India, the RSA, etc., came to Moscow.

In his speech, Aleksey Kudrin, the Chairman of the Accounts Chamber of Russia, noted that the audit community has huge creative potential: “We have many ideas, proposals and novations. They are aimed at the strengthening of the role of INTOSAI in the system of international organisations and at enhancement of its authority. It’s an ambitious goal that I believe to be attainable. And it may be attained in the foreseeable future”.

The main topic was the preparation for the XXIII Congress of INTOSAI**. It is the largest forum of the audit community, and in 2019 it will be held in Moscow under the chairmanship of the Accounts Chamber of Russia.

The Congress of INTOSAI will be devoted to two topics: “Information Technologies in the Development of Public Administration” and the “Role of Supreme Audit Institutions in the Achievement of National Priorities and Goals”.

According to Aleksey Kudrin, the selection of exactly these topics reflects the need for an evolution of the role of supreme audit institutions and introduction of new approaches to their work. “The center of our discussion will be a shift in emphasis from financial audit and compliance audit to strategic and complex approaches – to public audit for improvement of the effectiveness and accountability of public administration”, he said.

In the opinion of Aleksey Kudrin, the main result of the work of the XXIII Congress should be the “Moscow Declaration”. It must reflect new opportunities for improvement of the effectiveness of supreme audit institutions as a part of the system aimed at formation and implementation of a coordinated and stable policy.

Besides, as part of the Congress, it is planned to hold a number of discussion panels on other issues in order to expand the range of the topics that are in the focus of the audit community.
In addition to the organisational issues, members of the Governing Board discussed the communications policy of INTOSAI, summarised the results of activities of the organisation and its main committees since November 2017, and talked about the role of INTOSAI and supreme audit institutions in the achievement of sustainable development goals. Most discussions were related to the issues of interregional cooperation, raising the professionalism of employees, improvement of work with large data volumes and efficiency of use of information technologies in audit.
Reference Information:

INTOSAI is an international organisation established in 1953 and including supreme state financial bodies of 196 countries of the world. The Accounts Chamber of the Russian Federation has been a member of INTOSAI since the moment of its establishment in 1995 and takes an active part in its activities. The Russian controlling body works in all main regulatory and working bodies of INTOSAI, including the Professional Standards Committee and Knowledge Sharing Committee. The supreme state financial body of Russia is in charge of the Key National Indicators Working Group of INTOSAI and the Special Working Group of INTOSAI for Public Procurement Audit (transformed into the Public Procurement Audit Working Group at the XXII Congress of INTOSAI).